Situated at the top of William Brown Street, the memorial to the Duke of Wellington will be 150 years old in 2015. Yet it could have been erected earlier had there not been so many deliberations on design and location, as well as funding and building difficulties. 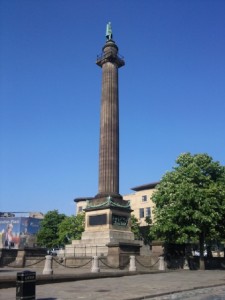 Arthur Wellesley began the Napoleonic Wars as a field marshal but in 1814 he became the 1st Duke of Wellington. The following year he commanded the Allied armies that defeated Napoleon at Waterloo. From 1828 to 1830 he was a Tory prime minister and held office again briefly in 1834. In later life he sat in the House of Lords and was Commander in Chief of the British army, and died following a stroke at the age of 83 in 1852.

In Liverpool the Wellington Testimonial Committee began a subscription in September 1852 to raise funds for a monument, but monies were slow to be forthcoming. Over £5,000 was raised by the end of that year, but more than double that was needed for the grand structure that the committee felt a town as ambitious as Liverpool should be erecting. 30 miles away in Manchester, citizens quickly came up with £8,000 for their monument, which was inaugurated in 1856.

By 1858, with only £7,000 having been raised, serious consideration was given to doing away with the column and having just a statue instead, but such a suggestion triggered an influx of monies. But there were continuing deliberations over where the monument would be situated. The site at the top of William Brown Street was offered to the committee by the Town Council in the 1850s but rejected,on the grounds that the statue would not be so prominent due to other grand buildings that were either built (St George’s Hall) or under construction (Liverpool Museum, Central Library) there. However the other proposed sites at the top Bold Street, Duke Street and in front of the Adelphi Hotel were all deemed too small.

For a while Prince’s Park appeared to be an option, but the committee expressed reservations that although open to the public, it remained the private property of the Yates family. They also pointed out that Admiral Nelson had his monument in Exchange Flags to the rear of the Town Hall, and Wellington should be given a prominent spot too. After initial reluctance by many members of the council to allow the u-turn by the testimonial committee, their arguments eventually won the day that Wellington should be seen by as many people as possible who lived and worked in the town, and by those arriving on trains at Lime Street.

The ceremony for the laying of the foundation stone was on 1st May 1861, on what would have been Wellington’s 92nd birthday. The ceremony began at 4pm and was attended by many civic digniataries. The Mayor Samuel R. Graves placed a bottle containing newspapers and coins from the day in a cavity in the ground, before covering it with a commemoration plate. Mr T.E. Moss, Treasurer of the committee then presented the Mayor with an engraved silver trowel and made a short speech, thanking the council for granting the land. He said he hoped that ‘in future generations however much Liverpool is absorbed in the various pursuits of commerce she does not neglect to honour to whom honour is due.’

The Mayor then proceeded to lay the foundation stone of the column, before quoting an Eastern proverb that says ‘everything is done by delay.’ He said that Wellington himself had faced difficulties and obstructions, but ‘he always reached his end in his own good time’  and so it was for the committee ‘who have had their difficulties and their obstructions but they have achieved what they promised to do when the subscription was originated.’

Runcorn sandstone was used for the foundations, then granite for the pedestal, but there were further delays due to difficulties in securing the Darley stone that would make the column the same colour as St George’s Hall. Due to Manchester having procured much of what was readily available from the Derbyshire quarries for their new Assize courts, patience had to be shown whilst more were opened to provide the stone for the 115 foot column.

Finally, on Saturday 16th May 1863, eleven years after Wellington’s death, the inauguration took place. Hughes crowds gathered in London Road and Lime Street, with bunting being flown from many windows. The committee, councillors and other invited guests assembled for a luncheon in the Town Hall before proceeding in a procession of carriages to the monument at 5pm. Over 2,000 soldiers surrounded the monument and after a cloth that covered it was removed the crowds cheered, there was a 19 gun salute and a band played See the Conquering Hero Comes.

The Mayor, Mr R. Gardner, then thanked the committee and 400 subscribers, and said he hoped ‘the day may be distant when the sword shall again be unsheathed.’ Sir William Brown, benefactor of the new museum and library in the street that was now named after him said that he hoped: ‘The monument would stand for hundreds of years to instruct posterity to appreciate the Duke of Wellington’s extraordinary genius and character.’ After more speeches from committee members the National Anthem was played, the guests headed back to the Town Hall and the crowds dispersed as the clouds dispensed some light drizzle. 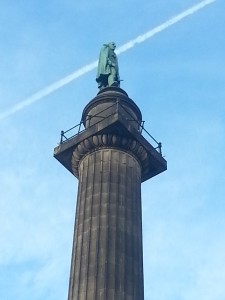 Atop the column, the 15 foot high statue was cast in bronze and weighed 5 tons. The Duke is dressed in Field Marshall’s uniform and carrying a sword and baton, whilst facing Waterloo rather than towards the commercial hub of Liverpool. Designed by Mr George Lawson (whose brother Andrew designed the column), the statue was cast at Messrs Robinson and Cotham in Pimlico, using guns that had been presented to them by the government, many of which had been captured at Waterloo. A winding staircase led up the column although this was not to take people to a viewing platform, but instead intended solely for maintenance purposes.

Even after the inauguration the monument was still not finished, as reliefs depicting the charge at Waterloo and Wellington’s battle victories had still to be added. Eventually it was complete by the end of 1865 and it has since stood the test of time. Wellington remains a dominant figure on the skyline looking down Lime Street, and is one of the first landmarks noticed when driving down Islington.

ARMY DRILLS IN THE MUSEUM