William Sewell, one of the heroes of the Crimean War who was injured in the Charge of the Light Brigade, is buried in Woolton’s St Peter’s Churchyard.

Born at Dorking in Surrey, Sewell enlisted with the 13th Light Dragoons at Westminster in 1851 at the age of nineteen. The cavalry regiment was sent to Crimea in 1854 under the command of Major General the Earl of Cardigan, helping ensure a retreat of Russian forces in the Battle of Alma on 20th September. 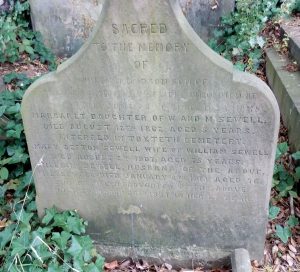 At the Battle of Balaclava on 25th October 1854, the regiment formed part of the Charge of the Light Brigade, a cavalry attack designed to repel Russian forces from capturing abandoned Turkish weapons. However due to miscommunication from the command, the regiment attacked a different artillery with excellent defensive ability, leading to a third of the men being killed or wounded.

Sewell was on the front line and his horse was shot from under him. However he managed to take control of a stray Russian one and get back to British lines. The following day he was removed by sea to the safety of a military hospital at Scutari, 500 kilometres away where he was treated for fractures to the skull.  After three weeks there Sewell was taken to Malta before finally arriving back in England in January 1855.

After spending ten months on invalid leave, Sewell was discharged from the army in November 1855 with a pension of 10d per day. He was just 23 years old and suffered headaches and vertigo, as well as having a silver plate fitted over  ahead wound.

Sewell secured employment as a coachman with the Earle family of Spekelands in Edge Hill. He also had luck in love, marrying their cook Mary at St Clement’s Church in Toxteth on 1st January 1857. The couple had two daughters whilst at Spekelands but sadly one of them, Margaret, died aged four in 1864.

The couple moved to Church Road in Woolton, presumably because other members of the Earle family lived at Allerton Tower.  Mary gave birth to a son that was also named William, but he died at the age of three in 1871 and they had no more children.

In 1881 Sewell was working as a coachman at Hankelow Hall near Crewe, but by 1891 was back in Liverpool, living at 18 Rose Lane in Mossley Hill where he would stay for the remainder of his life. He died at the age of 78 on 9th January 1910, three years after the death of his wife Mary. In his final years, Sewell relied on donations from the Balaclava Heroes Survivors Fund. He was Lancashire’s penultimate survivor of the Light Brigade, the other being Sergeant Edward Hindley who lived in Woodcroft Rod, Wavertree.

Hindley attended Sewell’s funeral and burial at St Peter’s Churchyard, where he was laid to rest alongside Mary and his son William. His one surviving offspring, Helen, never married and was buried there after she died at the age of 66 in 1927. Articles of Sewell’s uniform worn at Balaclava are on display at the National Army Museum.