George Cecil Mort, whose surname translates from French to English as ‘dead’, was the Liverpool Coroner for twenty five years prior to his retirement in 1953.

Mort was born in 1880 in Stroud, Gloucestershire. In 1905 he obtained a medical degree at the University of Manchester then  four years later got his diploma in public health at the University of Liverpool. His career took a turn though as he became a barrister, being called to the Bar of the Middle Temple in 1911. His pupilage was under William Procter, who went on to become a judge at Liverpool County Court.

During the First World War Mort was a surgeon-lieutenant with the Royal Navy. He served on the HMS Cochrane and was present a the Battle of Jutland. After being demobbed, he went back to medicine and set up a private practice in Menlove Avenue. This allowed him to undertake surgical appointments at the infirmaries of Liverpool and Manchester, Liverpool children’s and women’s hospitals, and as Stoke on Trent’s Schools’ Medical Officer.

Mort married his wife Hilda at All Hallows Church, Allerton, in 1922. Her father was Andrew Melville Patterson, a professor of anatomy. In 1928 Mort succeeded A.Glover Inglis as the Liverpool Coroner, being chosen ahead of forty three other applicants and appointed on a salary of £1,000 per year.

In one of is early cases, Mort expressed his disappointment at the jury’s verdict.  When sixty eight year old Jamie Kendrick was knocked down by a car  in Lower Breck Road on 9th September 1928, an accidental death verdict was returned. This was despite the driver of the car having been seen going at fast speed and reversing then driving off in the opposite direction after striking Kendrick. The jury had the option of returning either an open or manslaughter verdict and Mort told them after reaching their decision “Well if that is your verdict I do not agree with it.”

Mort would carry out many and varied inquests over is time. They include victims of freak accidents, road deaths, murders and suicides. He would also conduct the inquests of prisoners who were hanged at Walton Gaol.

After twenty five years service, in April 1953 Mort gave Liverpool Corporation three months notice that he would be retiring. He was not far off his 73rd birthday and his health had been suffering. The Liverpool Echo paid tribute, saying “His court has become a model of kindly consideration. His understanding of children has always enabled him to set them at ease when giving evidence and he has never made a practice of reading letters publicly of people whose death was by suicides.”

Mort died on 12th September 1957 at his home in Hillcroft Road, Woolton, after a long illness. He was 76 years old and left a widow and four daughters.  Liverpool’s Deputy Stipendiary Magistrate Mr England paid tribute, saying he was of ‘kindly disposition’. Mort was buried at Allerton Cemetery. 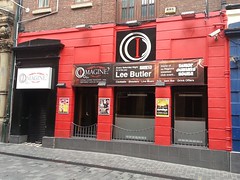