In St John’s Gardens there is a plaque in both English and French commemorating over 400 prisoners  who died in captivity in Liverpool during the Napoleonic Wars and were buried in the churchyard of the church that stood there at the time. They had been interred at the Liverpool Tower in Strand Street on the site of what is now Tower Buildings. Many of those who died did so of starvation due to prisoners going hungry if the French government didn’t pay for their rations, there being no Geneva Convention then. Such a harsh regime didn’t prove problematic for one prisoner though, who gained a reputation for his extraordinary eating exploits.

Charles Domery was born in Poland around 1778 but as a  teenager left home to join the Prussian army and then the French Revolutionary Army as conditions were better. He became known for his gluttonous habits and when stationed near Paris he thought nothing of catching and eating a cat if  no meat was available. Whilst at sea, his frigate Hoche was hit by a cannonball, severing the leg of a crew member which he tried to eat before it was wrestled from him.  The Hoche was captured off the coast of Ireland by Admiral Sir John Borlasse Warren in February 1799, leading to Domery’s removal to Liverpool and its Tower. 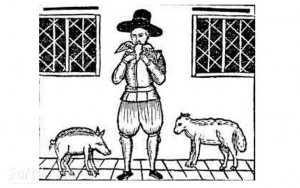 Domery stood at more than six feet tall but was of thin build. He was pleasant in character and other prisoners were willing to share their meagre portions with him to appease his ravenous appetite. In addition to the prison food, he would happily eat any rats that came into his cell and also the gaol candles. He always preferred his meat to be raw and ate a few pounds a day, once adding a bullocks’s liver to his intake. Domery was said to attack raw beef with ‘the eagerness of a hungry wolf” and would tear off morsels with his teeth then roll them about in his mouth.  He would never add bread or vegetables to his raw meat and would just wash it down with beer or water. He would also devour medicines that other prisoners did not wish to take and never vomited or suffer any negative reactions.  He rarely drank whilst eating usually waiting until he had finished before moving on to beer or water. Vegetables were far from Domery’s favourite and he would only ever have them if there was nothing else available and even then limited himself to potatoes or turnips. Despite this his tongue was clean and healthy and his eyes wide and lively.

Once Domery was taunted by the other prisoners because he was Polish and he reacted angrily to this, although he didn’t take it out on his fellow inmates. Instead he took a knife and cut two gashes in his arm, then wrote ‘Vive La Republique’ on his cell wall.

The tales of Domery’s eating soon extended beyond the Tower and Dr Johnston from the Commission for the Care and Treatment of Prisoners and War decided to put his supposed eating abilities to a test. At 4am on 7th September 1799 he breakfasted on four pounds of cows udder and for his next meal at 9.30am several respectable gentlemen of the town were invited to watch him face his next test.  He had no difficulty in eating five pounds of raw beef, twelve candles and one bottle of beer. At 1.30pm he ate another five pounds of beef and twelve candles but this time drank three bottles of beer.  He did this without vomiting, urinating, sweating or showing any signs of discomfort. To put these amounts into perspective, standard rations were half a pound of beef per day in addition to two pounds of bread, a few ounces of butter and half a pound of vegetables.

When he was returned to his cell he said how he could easily have eaten more and what made his feat even more remarkable was that it was a hot day and he wasn’t allowed to exercise at all between the two eating bouts. He then danced, smoked a pipe and drank more beer. The next morning he was up at 4am and ate another five pounds of raw beef. Although he didn’t do so on this particular night, Domery often sweated heavily during his sleep and would wake and throw off his shirt, then feel ravenous and eat some bread.

Nobody knows what became of Domery after his release from internment, in respect of whether he stayed in Liverpool or returned to France or Poland. He did come to the attention of author Charles Dickens in 1852, who wrote in his diaries on discovering the tale ‘Now, it is my opinion, that a man like this, dining in public on the stage of Drury Lane, would draw much better than a mere tragedian, who chews unsubstantial words instead of wholesome beef.’  In addition to leaving an impression on Dickens, Domery did so on anybody who served, was imprisoned with, or supervised him during his time in the army and as a prisoner of war.