Queen Victoria’s monument in Derby Square has a plaque commemorating the fact that Liverpool’s castle that once stood on the site. However that was demolished nearly 200 years before the monument was unveiled, with a church being there in the intervening period. Even when that closed, there were other plans for the site before it was eventually decided to put a monument to Britain’s longest reigning monarch there. 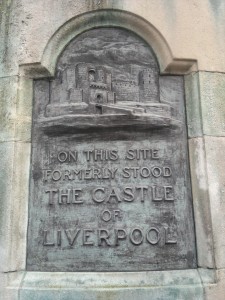 The castle was built in the 1230s to protect King John’s new port of Liverpool, and its most famous visitor was Edward II in 1323 when he lodged there for a week. Most of its action came in the 17th Century, when it was seized by Prince Rupert in the English Civil War in 1644, re-taken by Sir John Moore and then in 1689 supporters of William of Orange took control. In the early 18th Century the burgesses of the town took a lease from the Crown and opted to demolish it due to being in a considerable state of decay.

In 1717 the tenants of the castle’s round tower were given notice to quit and Liverpool’s MP Sir Thomas Johnson began plans for building a church there. After the castle was demolished much of the stone was used to build the walls of Canning Dock, which still stands today and houses some Maritime Museum exhibits. Dock engineer Thomas Steers returned the favour by helping design the church steeple. Construction commenced  of the church commenced in 1726, although Johnson never got to see it completed, dying in London in 1728 at the have of 64, having lost much of his fortune through poor investments.

The church was consecrated in 1734 by the Lord Bishop of Chester, with the first chaplain being the Reverend Henry Wolstenholme, assisted by Reverend Cuthbert Sewell. They were on salaries of £50 and £40 respectively. Revenue was raised by renting out over 100 seats in the church and also storage vaults underneath. One side of the church contained five rustic arches, and a terrace that was used to house the Red Cross market. It was said that the altar stood on the exact site of the altar of the castle chapel. 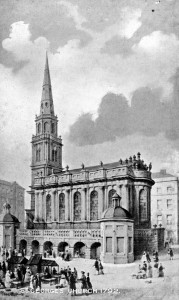 Fears were raised over the safety of the spire as early as 1762. In the 1790s architects examined it and found that although it was in no imminent danger of falling, the spire was out of alignment. In 1809 the whole steeple was taken down in 1809 and a new one completed in 1818 at the cost of £10,100 which was more rounded than the original. The church was the victim of a theft that year when Catherine Stephens stole two books, for which she was sentenced to six months imprisonment.

For many years the church was the venue for the Mayor’s first service after being elected, but that practice stopped in the 1860s after the incumbent preached a sermon denouncing the choice of a Jewish mayor. That decade also saw the church close for a refurbishment, triggered by the explosion on the Lotty Sleigh on the River Mersey in January 1864. Ten tons of gunpowder exploded on a ship on the other side of the river at Monks Ferry, but its force was so great that stained glass windows in the church were blown out. In addition to replacing the windows, a complete redecoration was also carried out.

Towards the end of the 20th Century congregation numbers were falling and the city council decided to rationalise the number of churches in the city centre. This led to the decision being taken to close St George’s and St John’s. The last service at St George’s took place on Boxing Day 1897, which fell on a Sunday. Speaking about the falling congregations that led to notice to quit being served, the Reverend J Turner said: “The church has outlived its usefulness in which some of you have offered up for many years your prayers and praises to Almighty God.” 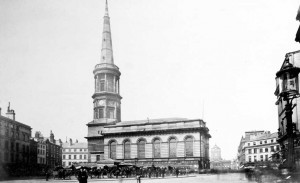 St John’s Church closed in 1898 and both were demolished in June and July 1899. There had been calls by many locals to preserve the steeple and spire, but the council chose instead to clear the church completely, also re-interring over 500 bodies from the crypt elsewhere.

One grand scheme first proposed for the new open space was for it to be the starting point of a bridge across the River Mersey, reported in the Liverpool Mercury on 9th July 1897.This never got going and a statue of former Prime Minister William Gladstone, born in Liverpool in 1809, was proposed instead. This though ended up being sited in the newly created gardens that opened in 1904 on the site of St John’s Church.

In October 1902 construction began of the Queen Victoria monument, designed by F.M. Simpson of the Liverpool School of Architecture. It was unveiled by Princess Louise on 27th September 1906 and although it contains a plaque concerning he castle, there is no reference to St George’s Church.