The Liverpool Institute in Mount Street may be best known as the school where Paul McCartney and George Harrison attended in the 1950s, but eight decades earlier it was the venue for three lectures by American author and humourist Mark Twain, author of Huckleberry Finn and The Adventures of Tom Sawyer. 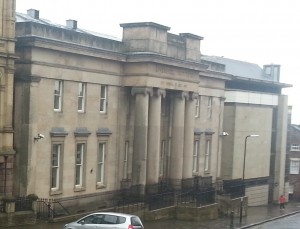 Twain’s real name was Samuel Longhorne Clemens and he was born in 1835 in Florida, Missouri before growing up in Hannbal, which provided the inspiration for his most famous works. After working as a printer, typesetter and river pilot he became a miner in California, where he gained the inspiration for the short story The Celebrated Jumping Frog of Calaveras County, which was hugely popular and translated into French and Greek. In 1865 Twain travelled to the Sandwich Islands (now Hawaii) as a reporter for the Sacramento Union and two years later toured southern Europe and the Middle East, writing letters which were compiled to The Innocents Abroad, published in 1869.

His writings were full of wit and satire and Twain became in great demand for lectures. In November of that year he undertook a 49 lecture tour of the east of the United States, titles ‘Our Fellow Savages of the Sandwich Islands.’ In 1871 he began a five month 77 lecture tour in America and then in September 1872 he came to England for the first time, speaking on three occasions in London. 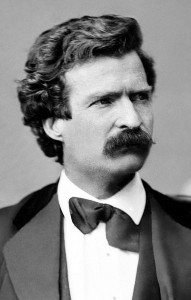 Twain’s first engagement in Liverpool came in October 1873, when he was on his way back to America after six lectures in London. He spoke at the Institute, which had opened in 1825 as the Mechanics Institute but had became the Liverpool Institute and School for Arts in 1856. The packed audience included many local celebrities and Twain took the stage to an air of suspicion but once he bowed the audience were applauding. He gave an hour long lecture entitled Our Fellow Savages of the Sandwich Islands, drawing laughter on many occasions, the first time being when he described them as made of lava and coral without a piece of legitimate dirt.

He spoke of how the inhabitants, who were a ‘rich dark brown colour’ and liked to eat roast dog and raw scaled fish, were happy until the white people came along. He described a never ending summer as the climate, with no frosts to destroy the crops, but if you wanted a change you could climb the hills where it was quite cold. He then went on to give some real life stories of what he had seen there, including a legislator who was extremely vain and a trader who was extremely creative at lying. He also gave a vivid picture of a volcanic eruption while the biggest laugh came when he spoke of a man who tried to cure stammering by intermittent whistling. The following day’s Liverpool Mercury called Twain ‘remarkable’ and ‘the most original of American humourists’ and reported that he would be sailing that evening for New York aboard the Batavia.

Twain was not home for very long as just three months later he was back in Liverpool, having given twenty lectures in London and one in Leicester during December and early January. Again he Liverpool Institute was the venue on Friday 9th January 1874 as he read from Roughing It, which was published in 1872 and detailed his experiences travelling around the American Mid West and Rocky Mountains in a stagecoach.

The following day’s Liverpool Mercury described how he took to the platform solemnly as if to deliver a funeral sermon, only instead to deliver a flash of wit.His descriptive power was described as being of the highest order whilst his ‘word painting’ was said to be perfect. The Manchester Evening News felt he was ‘sharp and slightly coarse.’ Roughing It was followed by Jumping Frog and the following night he told tales of the Sandwich Islands and Jumping Frog. He then set sail for Boston on board the Cunard liner Parthia on 13th January.

Having so far only written short stories, over the next two decades Twain went on to write novels including The Adventures of Tom Sawyer, Huckleberry Finn and The Prince and the Pauper. He did still undertake speaking tours and was by now in massive demand, embarking on a massive 140 date world tour in 1895 that took in four continents.

By the time Twain came to Liverpool again in 1907 he was 72 years and in poor health, having sank into a deep depression after the death of his 24 year old daughter Suzy from meningitis in 1896. Twain was a widower on his final visit to the city as his wife Olivia had die three years earlier. It was part of a six week visit to England that saw him attend luncheons in his honour at London, Stratford on Avon and Oxford, where he was awarded an Honorary Doctorate of Letters.

The purpose of Twain’s appearance in Liverpool was to be guest of honour at a banquet in Liverpool Town Hall on 10th July held as part of the city’s 700th birthday celebrations. His health was now so poor that he did not attend the actual dinner, having chose to rest after travelling during the day and arriving in the city at 4pm. When he did enter the room where 200 guests were waiting a toast was proposed by MP Mr T.P. O’Connor, who described him as ‘the most honoured and respected guest that England had for many a year.’ 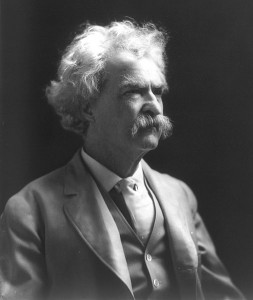 When Twain rose to speak, he said that having earlier been weary he was now ‘rested and frivolous’ and told a short story called Begum of Bengal, in which he likened himself to ‘a stately Indiaman, plowing the great seas under a cloud of canvas and laden with the kindest words that have ever been vouchsafed to any wandering alien in this world.’ The following day, Twain returned to London before sailing from Tilbury on 13th July for America.

The speech at Liverpool Town Hall turned out to be Twain’s last on this side of the Atlantic. In 1909 he predicted his own death was near, saying that he had come into the world in the year of Halley’s Comet and would go out of it on its next passing. On 21st April 1910, just a day after the comet’s closest passing, Twain died of a heart attack in Redding, Connecticut. He was buried at Woodlawn Cemetery in Elmira, New York.

The arts side of the Liverpool Institute moved to a separate building in 1880 and in 1905 the local authority took over he school, when it became known as the Liverpool Institute High School for Boys. Apart from McCartney and Harrison, other notable pupils included comedian Arthur Askey, broadcaster Peter Sissons and theatre impresario Bill Kenwright. In 1985 the school was closed by the city council as it moved away from grammar schools towards comprehensives only. The building fell into disrepair but thanks to the backing of Paul McCartney, it was refurbished and largely rebuilt behinds its façade, re-opening in 1996 as the Liverpool Institute of Performing Arts (LIPA). This is now part of Liverpool John Moores University and offers degree courses in areas such as acting, dance, music and sound technology.