A terrible explosion on board the Cunard liner Mauretania whilst it lay in dry dock in 1914 led to the loss of four lives.

On 26th January that year the vessel was out of active service and undergoing its annual overhaul. Workmen were fixing blades to turbines in the engine room at about 9.30pm when a gas cylinder that had been providing heat for the soldering process exploded.

The explosion was heard throughout the vessel and other workmen ran to the nether regions of the ship to offer assistance.  Three men had been killed instantly and their bodies were severely dismembered, but rescue of the injured was at first near impossible due to the smoke and intense heat. The master at arms managed to extinguish the flames whilst wearing a smoke helmet and this allowed others to enter and begin the horrible task of collecting the remains and removing the injured.

Due to the narrow gangways and the need for stretchers it was a complicated operation to get the men ashore. Of the nine who survived the blast, only one escaped serious injury and doctors at the  Stanley Hospital have little hope of survival to two of those who were admitted. The three dead were named as James Thomas of Dingle, Samuel Gidman of Egremont and George Coventry, who was from the North East but now living in Bootle. Amazingly there was little damage to the rest of the vessel and the hull was unscathed.

The following day John Magee of Stoneycroft succumbed to his injuries and Cunard issued a statement expressing sympathy to the families of the four men. The cylinder that had exploded was seven feet long and four inches in diameter, made of steel and had a pressure of 1800 pounds to the square inch. The British Oxygen Company who had sent the cylinder out made it clear they worked to strict Board of Trade Conditions that meant they had to first be tested to ensure they could actually withstand over 3,000 pounds to the square inch.

The public were sceptical of such reassurances though given the metal could become strained with repeated use. Their confidence was not aided just two days after the explosion when a pipe attached to a cylinder on the Empress of Ireland, which was lying in Brocklebank Dock, broke  and caused a small explosion. Nobody was hurt but in the confusion and panic that followed, one man fell down a hatch and broke his collarbone. 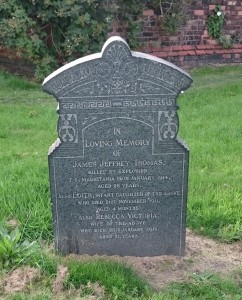 Thomas, a 28 year old engineer whose father had been a Chief Superintendent of Liverpool Fire Brigade, was buried in Toxteth Park cemetery alongside his infant daughter. Wreaths were sent by Cunard and engineers and caterers from the Mauretania. His gravestone mentioned the nature of his death, but interestingly spells the name of the vessel wrongly.

The inquest took place on 13th February and heard from officials at the British Oxygen Company which was based in Manchester. It was acknowledged that an oxygen cylinder had incorrectly been filled with coal gas, but that the workmen present should have picked up on this due to the thread and stopcock being in a different position than it should have been for this type. This led to a verdict of accidental death being returned.

In delivering the verdict the Coroner stated ‘Death was accidentally caused by the explosion of the cylinder owing to being sent out of the works of the British Oxygen Company filled with coal gas and oxygen, and the explosion was contributed to by servants of the Cunard company disregarding the right hand thread of the cylinder.’ The day after the inquest the Mauretania left Liverpool as scheduled scheduled for New York, the explosion having caused no delays to its sailing programme.

More about the Mauretania in this book available from Amazon