The first of the ‘Three Graces’ on Liverpool’s waterfront was completed in 1907 when the Port of Liverpool Building, then known as the Dock Offices, opened. The final product though was far different than first envisaged, as a plan for a twenty storey skyscraper was rejected and a dome added to the chosen design late in the day. 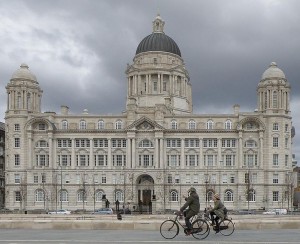 At the beginning of the 20th Century the Mersey Docks and Harbour Board (MDHB), in need of bigger premises,  decided to move away from their home at the old Custom House. A senior official was sent on a fact finding mission to New York, where the development of the elevator and electric lighting had led to the development of taller buildings over the last ten years, including the 303 feet high American Surety Building. However at a Board meeting in July 1901, it was decided not to press ahead with plans for a twenty storey building and go for a different design instead.

George’s Dock had been filled in and the land sold to Liverpool Corporation in 1908, but the MDHB kept hold of the southern plot, and a competition was held which invited entries for the new headquarters. Alfred Waterhouse, who had built the North Western Hotel and University of Liverpool’s Victoria Buildings, was the principal judge and he opted for Alfred Thornely’s Neo Baroque design, based on the French Renaissance of the 18th Century. Thornely’s building consisted of five floors and was aimed at reflecting Liverpool’s position in the British Empire, containing enough floor space to make it the largest office building in the country in terms of square feet.

Manchester firm William Brown & Son were awarded the contract to do the building work, which began in 1904. First of all foundations had to be laid which went 40 feet below ground level and involved 35,000 tons of concrete being poured into the crater that had been dug. This was then coated with asphalt to ensure it remained waterproof. The building’s frame was then constructed of reinforced concrete and clad in Portland stone, which offered greater fire protection.

The decision to add the dome was made quite late in the day design wise and caused some controversy. The idea came from an unsuccessful design that had been submitted for the Anglican Cathedral, and the aim was to make the building more imposing. Some Board members though did not think it was the MDHB’s job to ‘beautify’ the city and just wanted a functional building, but they were outvoted by those who wanted to impose an architectural presence. There is no doubt that the dome made the building far more imposing, becoming its focal point and being compared by some to City Hall in Belfast , St Paul’s Cathedral or The Capitol in Washington DC. It is 220 feet above ground level and made of copper and stained glass, making it far higher than the 91 feet that the main roof rises to. At each corner, the octagonal towers are 140 feet high

No expense was spared on the internal fittings with only the finest mahogany and oak being used along with brass, white marble and granite. There are references to the sea and British Empire everywhere. The main gates contain a globe held up by dolphins and a frieze between the ground and first floors contains the words of Psalm 107 which says. ‘They that go down to the sea in ships that do business in great waters these see the works of the Lord and his wonders in the deep. Anno Domini MCMVII’ When work was completed in 1907 the total cost was about £300,000 but this was not excessive when it is considered the Lancashire General Advertiser reported that yearly revenue was £1.5 million. 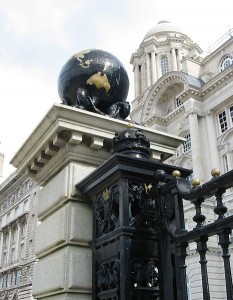 Staff started moving in on 15th July but there was no great fanfare and at the first Board meeting three days later which was presided over by Chairman Robert Gladstone, no comment was made on the move. By the end of the year the building was fully occupied, with offices that were attended by the public all being on the ground floor, half of them dedicated to the collection of customs and revenues.

During the May Blitz of 1941 a bomb exploded at the eastern side of the building, causing substantial damage. However within weeks all staff were able to continue their work thanks to temporary repairs, although the full restoration after the war cost more than the building did in the first place.

In 1972 the MDHB was re-named the Mersey Docks and Harbour Company, with their headquarters being renamed the Port of Liverpool Building. After 87 years they moved out in 1994 to new premises in Seaforth, reflecting the fact that the location of docks in the city has shifted over time. The MDHC, as it is now, still owns the Port of Liverpool Building and rents office space out to a number of smaller companies. 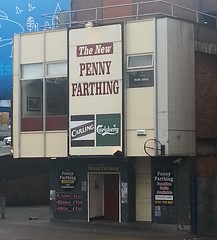