A tragedy occurred on 26th November 1866 when the Elizabeth Buckham and her cargo was lost in Liverpool Bay, leading to the deaths of all on board as well as two people on the shore.

The Elizabeth Buckham was built in Whitehaven in 1837 and weighed 242 tons. Initially she sailed between England and Australia, setting a new record of 118 days for the voyage in 1844. Her last voyage Down Under was in 1853 and she was then purchased by Messrs Booker and Co for use on their Liverpool to West Indies routes.

On the 26th November 1866 the Elizabeth Buckham was coming to the end of a two month voyage from Demerara in South America. Under the command of Captain Wylie the vessel was carrying a cargo of coconuts, sugar and rum and had a crew of twelve. There was a heavy gale and at about 10pm she ran aground on Burbo Bank, off the coast at Crosby, where waves then began to pound her. A tug named the Rattler went to assist but it was too dangerous to go any closer, although on hearing cries for help she set off for port to summon a lifeboat.

By the time the Rattler and a lifeboat had reached the Elizabeth Buckham she had broken up and wreckage was floating about the area. The lifeboat searched for any signs of life but it was in vain and along with the Rattler it returned to the Mersey. Soon afterwards two tugs arrived from Preston and reported sailing through a great deal of debris in the Formby Channel.

The tragedy came almost a year to the day that the Favourite, also belonging to Messers Booker and Co, was lost at Blackpool carrying a similar cargo from Sierra Leone.

The following day several coconuts were washed up along the North Wales coast, while a lifeboat and several puncheons of rum were found at Hoylake. There was chaos at New Brighton, where an estimated two hundred people of what the Liverpool Mercury described as from the ‘lower order’ fought over the washed up rum. Women were said to have been seen drinking from their boots and policemen had to drag many to safety after they passed out on the beach or in nearby sand dunes.

The paper described the scenes as of ‘indescribable disorder and depravity’ and reported that many of the ‘helpless inebriates’ had their stomachs pumped after being found in states of ‘beastly intoxication’ before being taken before magistrates in Birkenhead and fined. However there was no such leniency for two people, one of whom was said to be respectably connected and related to a local hotel owner, as they were washed away by the tide and were presumed drowned.

A Board of Trade enquiry subsequently seemed to give more consideration to the lost excise revenue than that of human life. Rather than focus on how the shipwreck could have been avoided, more attention was given to the lack of customs officers in Wirral and the fact only five police officers were assigned to Wallasey. 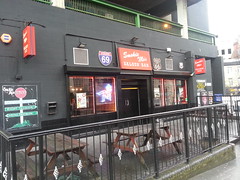