Peter Kavanagh’s pub in Egerton Street is one of the most famous in the city. Originally the Liver Inn, it is now named after the licensee who ran it for an incredible fifty three years from 1897 to 1950.

In addition to running the pub which bears his name, Kavanagh found time to take a seat on the city council, invent seats for Hull’s trams and be a floral artist. He was 26 years old when he took over and lived there with his wife Ellen, two sons and one daughter.

Mary, Peter Kavanagh’s only daughter, married merchant seaman Vincent Jones (photo left) and the couple ran the Talbot Hotel in Ormskirk. However in 1934 Mary died leaving Vincent a widower and with the couple having had no children, he went back to sea whilst maintaining a home at 21 Percy Street, less than 200 metres from his father in law’s pub.

Vincent’s life came to a tragic end as a result of enemy action in the Second World War. On 30th January 1940, he was working as a radio officer on board the SS Royal Crown which was attacked by a German bomber over the North Sea. The first bomb killed the Royal Crown’s gunner before he could even take up position and the aircraft then swept round again and machine gunned terrified seamen as they tried to clamber into lifeboats, killing eleven of them.

A second bomb was then dropped from a height of just 150 feet, taking out the engine room before the plane flew off into the distance. The remaining lifeboat headed for the shore but as it tried to land, seven men were swept away in the stormy conditions. Fifteen men did manage to make it ashore through the breakers. At this stage they did not know about the other lifeboat being lost, meaning those that went out searching for it did so in vain. 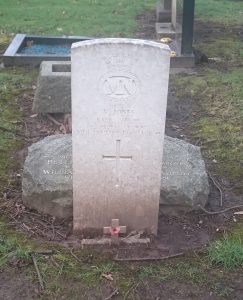 When the Royal Crown ran aground police boarded and removed four bodies of men that had been killed at the start of the attack, including that of Vincent. In total, 22 of a crew of 37 had been lost.

Vincent’s death notice in the Daily Post said ‘At sea, on board the Royal Crown, Vincent, beloved husband of the late Mary Valentine Jones.’ He was buried in Allerton Cemetery and his grave is now marked by a Commonwealth and War Graves Commission headstone.