The gates to the Liverpool Sailors’ Home that once stood in Canning Place are now in a prominent position in Liverpool One at the  corner of Hanover and Paradise Streets. The home had two openings, one in 1850 and the another on 21st April 1862, after a two year closure due to fire. 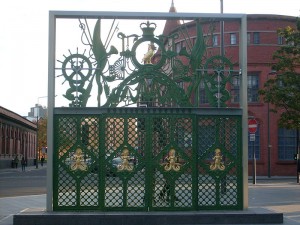 Opened in 1850, the home was built to offer a better standard of accommodation that was available in many of the other lodging houses in the town. Designed to look like a ship’s interior, the 340 private cabins ran off galleries that were spread over five floors. However just ten years after opening the building was gutted by fire in the early hours of 29th April 1860.

It was a miracle that only two people, one of them a police fire brigade officer, died in the blaze which was started deliberately. It destroyed the  the inside of what the Liverpool Mercury referred to as ‘that noble building’ which had ‘done so much towards improving the social and moral condition of the numerous seamen frequenting the port.’ 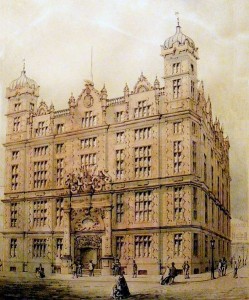 The building was insured to the sum of £13,000 and this, coupled with charitable donations, allowed for rebuilding to begin quickly. The number of rooms remained the same, but more bathrooms were provided in addition to better cooking facilities and more storage space. By April 1862 the building was ready and on the 21st of that month, which was Easter Monday, the first general meeting since the fire took place in the dining hall. A toast was made to the late Prince Albert, who had laid the foundation stone in July 1846 when he visited the city to open the Albert Dock. Another was then made to Queen Victoria and those who had helped raise £4,000 were thanked. The chair of the committee, Mr Darbyshire, then addressed the new inmates and formally declared the home as open again.

In the evening a concert was given in the main hall by the Sailors’ Home Glee Party, which consisted of five men and two women. The aim of holding concerts in the building was to provide entertainment for the men when they may have otherwise have been open to temptation of prostitutes and alcohol.  On this particular occasion, many ladies and gentlemen of the town attended in addition to sailors and the following day’s Mercury reported that ‘many of the songs were loudly encored and all the artistes were greeted in the most cordial manner.’

The home remained open until 1969 and the building was demolished five years later. There is now a permanent reminder though as the gates were returned to Liverpool in 2011 after being on display in a museum in Sandwell, West Midlands.