In 1886 there was an extraordinary incident at Liverpool’s Royal Court theatre that left an actor facing a court summons after assaulting an impresario during rehearsals.

Leslie Crotty was an actor with the Carl Rosa Opera Company who began a five week residency at the Royal Court at the beginning of the year. Founded by German Carl Rosa in 1873, the company aimed to make opera entertaining and affordable for the masses, performing in English whilst employing established stars and giving young actors a chance.

On the afternoon of Tuesday 19th January the troupe were on stage rehearsing for a performance of Nadeshda, when Crotty noticed Colonel Henry Mapleson, a well known impresario, standing at the edge of the stage. The actor then went up to Mapleson and it is at this point where  versions of events differ. Mapleson says he was stood with his hands in his pockets and struck twice in the face, whereas Crotty says he went to have a word and was grabbed and pushed back. 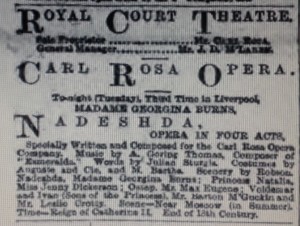 After the pair were separated Mapleson went to the police court to see Magistrate Clarke Aspinall, who granted a summons requiring Crotty to attend court three days later and be compelled to keep the peace. Crotty in return obtained his own summons on the grounds that he had only acted in self defence. While all this was going on, Carl Rosa kept  a neutral distance, instead attending functions to celebrate the opening of the new underground railway between Liverpool and Birkenhead.

It was particularly uncomfortable for the company as Mapleson was married to one of the performers, Marie Roze (below). She had already endured some trauma the previous month when she was the victim of a peeping tom whilst getting ready for a performance in Bradford. The man was found by Rosa’s baggage master, with papers reporting that a ‘sound thrashing’ was administered and there was no expectation of an assault summons being sought. 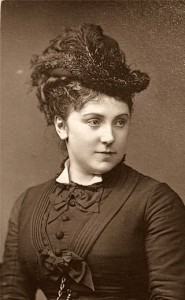 The courtroom was packed on Friday 22nd January when both parties and their legal representatives attended for what was being dubbed ‘The Liverpool Theatrical Scandal.’ Mapleson’s barrister told the court that Crotty was angry at an article in the local press criticising his performance in a play and believing Mapleson to be responsible, struck him in the face. The article in question referred to Crotty’s make-up being ‘unnecessarily slovenly’ and his acting ‘elemental.’  Mapleson claimed he received a cut to the cheek from the diamond rung that Crotty was wearing, but also indicated that if he accepted the article had been written by somebody else the summons would be withdrawn.

After a great deal of legal wrangling, both parties agreed to shake hands and withdraw the summonses, although Mapleson maintained he had nothing to be regretful for, only the fact he had a cut on the cheek. The episode did not do Crotty any harm and things were soon forgotten, appearing with Madame Roze on many more occasions. One of these was at the Theatre Royal in Belfast the following September where the critics were far kinder, the Belfast News Letter commenting that ‘Leslie Crotty never appears in an opera without contributing to its success.’