The first integrated sewage system in the world was developed in Liverpool in 1848 and overseen by newly appointed Borough Engineer James Newlands.

Born in Edinburgh in 1813, Newlands was one of nine children. After distinguishing himself in mathematics and natural philosophy at the High School of Edinburgh in the late 1820s he became apprenticed as a civil engineer to Tomas Brown, an architect at Edinburgh. 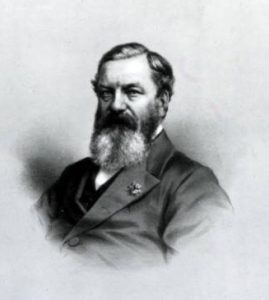 oon set up his own practice and worked on a number of church projects, as well as writing text books on architecture, carpentry and building. He also contributed to the early additions of Encyclopedia Britannica. Towards the end of 1846 his attention was drawn towards an advertisement for the position of Borough Engineer in Liverpool, one of three positions created by the Liverpool Sanitary Act. The others were that of Medical Officer for Health and Inspector of Nuisances, which were filled by William H Duncan and Thomas Fresh respectively.

Newlands displayed his abilities in sanitary science to be appointed ahead of four other candidates to the position of Borough Engineer. He began his new role on 26th January 1847 on a salary of £700 per year, along with a horse and vehicle. For at least the first fifteen years of his time in Liverpool, he lived at  Clare Terrace, Marmaduke Street in Edge Hill.

During the interview process he had been made aware how bad conditions were in the town and immediately set about producing one of the most detailed and expansive maps of Liverpool ever made. The scale was one inch to twenty feet and it contained 3,000 geodetic observations.

As a result of Newlands’ survey and proposals that were presented to the Town Council in April 1848, a comprehensive network of sewers was developed. The programme took 21 years to complete and totalled 300 miles when subsidiaries and contributory drains were taken into account. Their benefit though was seen in Liverpool’s life expectancy, which was only nineteen in 1848 but had doubled by the time he retired soon after completion. 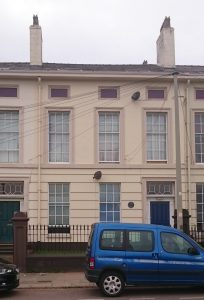 Responsibility for paving, lighting and baths also came under Newlands’ wing and despite the corporation having specialist architects and surveyors his opinions were often sought. He advised John Weightman on the design of Walton Gaol and developed Cornwallis Street baths. However his advice to the corporation that a boulevard style ring road around the town would be beneficial to peoples health was rejected. Such a scheme was however developed by one of his successors John A Brodie, who laid out Queens Drive.

In his first six years in office Newlands twice saw substantial increases in salary to £1,000 then £1,300 as he took on further responsibilities to do with water supply and building.  His abilities were noticed by central government when the Crimean War broke out in 1854. In February 1855 they asked the town council to release him temporarily due to disease being rife in the British camp, with far more soldiers dying of illness than in battle. With the corporation’s blessing Newlands successfully tackled the problem and after returning to his duties in July received a complimentary letter from nurse Florence Nightingale that said ‘Truly I may say that sanitary salvation to us came from Liverpool.’ Whilst in Crimea Newlands kept a diary and also showed his artistic talent, making a number of sketches which were distributed by the Liverpool Mercury newspaper.

In 1869, around the same time the sewer system was completed, Newlands’ health began to fail and he suffered bouts of bronchitis. He was granted several months leave of absence by the corporation and travelled to Italy in the hope he would improve and although he did so, there was a downturn the following year. He again went for a break to Wiesbaden in Germany where he had an unfortunate occurrence following the outbreak of war with France. One morning he went for a walk and surveyed the surrounding countryside only to be taken prisoner on suspicion of being a French spy. Thankfully he had letters of reference and was able to convince authorities who he was, so his incarceration was short. 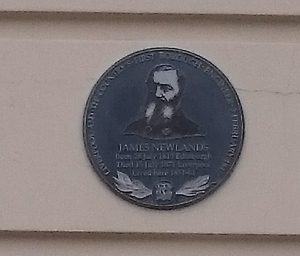 This second foreign trip didn’t improve Newlands’ health and early in May 1871 he made an agreement to stand down from active duties, becoming a consultant at a still attractive salary of £800 per year. His assistant Mr Davies was promoted to Acting Borough Engineer and saw his salary rise from £400 to £600.  However this arrangement did not last long and after spending two weeks confined to bed Newlands died at his home in 88 Chatham Street on Saturday 15th July 1871. His sister Jessie, with whom he had lived since the death of his wife in 1848, was by his side. As a mark of respect, the flag at Liverpool’s Town Hall was lowered and blinds closed in public buildings.

Newlands’ funeral took place at the Necropolis on Low Hill the following Thursday, attended by the mayor and a number of other prominent council officials. He is remembered today by a plaque on the wall of his former home at Clare Terrace and also by one in Abercromby Square, as his Chatham Street residence is no longer there.

James Newlands’ book The Carpenters Assistant is available on Amazon.