Castle Street is one of Liverpool’s original seven streets and steeped in history, some of it quite noticeable such as the Bank of England and medieval sanctuary stone. The street’s connection with the Titanic though is far more discreet, the building concerned showing no reference to it.

14 Castle Street, now a firm of solicitors, in 1912 contained the offices of CW & FN Black, who recruited musicians for the big shipping lines. The musicians were employed by the agency not the lines and travelled as 2nd class passengers. They were recruited from all over the country, with one of them Roger Bricoux, coming from France. Bassist Fred Clarke was the only band member from Liverpool and he lived with his mother in Tunstall Street Wavertree. 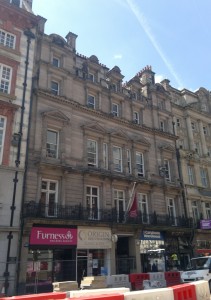 The band is most famous for playing on deck as the ship went down, but this was the first time they had performed together. Prior to that they had played in separate parts of the ship as a quintet and a trio. It was said by passengers that they continued playing until they reached the waves. Only three of the eight bodies were recovered, including that of Clarke who was buried in Halifax, Nova Scotia along with John Hume.

Only band leader Wallace Hartley was buried in Britain, his body arriving at Liverpool on 12th May. It was then taken by horse drawn hearse to his home town of Colne in Lancashire and 30,000 attended his funeral.

Three months after the tragedy the firm caused controversy when the father of violinist John Hume was sent a bill for 5s 4d for the cost of cleaning his uniform and adding a White Star Line badge. The letter was printed in the monthly newsletter of the Amalgamated Musicians Union.