Hugh Walter McElroy, the chief purser on the Titanic, was born at 3 Percy Street in Liverpool’s Georgian Quarter  on 28th October 1874.

Hugh’s parents were staunch Roman Catholics Richard and Jessie McElroy who originated from County Wexford in Ireland. When he was seven his parents moved to 6 Eversley Street in Toxteth. 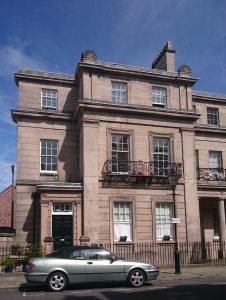 When Hugh was 16 he joined the “Canons Regular of the Lateran” at St Mary’s Priory, Bodmin, Cornwall, as a student for the priesthood. However after two years he decided this was not for him and he left in 1892, returning to his home in Liverpool where he followed his father by joining the Merchant Navy. Hugh’s experiences didn’t deter his younger brother though who would be ordained as a priest and officiated at his wedding.

Hugh joined White Star in 1899 and served for three years on the troopship “Britannic” during the Boer War, taking servicemen to South Africa. He then served on the “Majestic” and “Adriatic” under the command of Captain E. J. Smith, with whom he would work on the “Titanic”. After serving on the “Olympic” he signed for the “Titanic”s maiden voyage on the 9th April 1912 as Chief Purser on a salary of £20 per month (£2160 in 2017 prices). At the time he signed up, he was living in Southampton with his wife Barbara, who he had married in 1910 but had no children.

One of Hugh’s first tasks on the “Titanic” was safely transport a canary belonging to Mr Meanwell from Southampton to its owner in Cherbourg. As Chief Purser, he was required to dine with passengers who would otherwise have had no company and was popular due to his sense of humour.

His quarters were centrally located off the forward Grand Staircase on the starboard side of the vessel. They consisted of a suite of offices dedicated to conducting the Ship’s business affairs, especially those that affected passengers. His enquiry office would be where passengers visited to purchase tickets for the ship’s Turkish baths, deck chairs, swimming pool, and electric baths. It was also the place for passengers make payments if they wanted to to send a radio telegram to locations on shore or a greeting from the “Titanic” to friends and family on passing ships.

On the fateful night of 14th-15th April 1912, Hugh had spent the evening , as usual, in the 1st class restaurant, dining with passengers. At around 10pm he went round picking up the takings from the the various bars and then took them to his office before retiring to his cabin.

Prior to the “Titanic” going down Hugh was seen with Captain Smith heading toward the mail room, then standing alone on the boat-deck near the gymnasium, beside mail clerk Mr William Logan Gwinn, A few days Hugh’s body was pulled from the sea by the crew of the rescue ship “MacKay-Bennett”. The body was dressed in ships uniform and wearing a white officer’s dinner jacket and on further investigation he was identified by effects which included keys tagged “Linen locker No 1 – C Deck” and his sisters address in Dorset. Due to his high state of decomposition he was buried at sea.