The last of the Three Graces was completed in 1916 when the Cunard Line’s new offices opened between the Liver and Port of Liverpool buildings. The palatial new building, which was a fitting home for the company, contained many subtle features in the detail of the architecture. 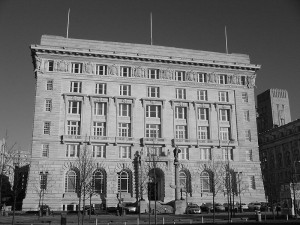 Cunard’s first sailing from Liverpool to Halifax and Boston was in 1840, with Samuel Cunard reportedly saying that he wanted to conquer the seas in the way that the Romans conquered the land. When, Cunard announced in 1914 that they would be moving from their Redcross Street headquarters, it seemed fitting that their new home would be in the style of an Italian Renaissance palace. The architects were Willinck and Thicknesse, who had designed the Liverpool School of Art in Hope Street that was completed in 1910. After first considering a Grecian style, they went for an Italian theme, based loosely on the Palazzo Farnese (below) that was built in Rome in the early 16th Century for Cardinal Allesandro Farnese, later Pope Paul III. 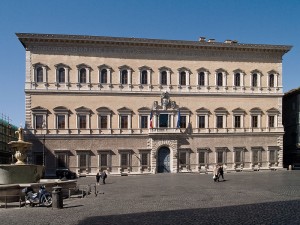 On Monday 12th June 1916, the day that Cunard moved in, The Daily Post said of the building that it was ‘the very last word in commercial architecture’ and ‘a palace on the riverbank which sets a standard for the envy and emulation of all the cities of the kingdom.’ Built using 11,000 tons of Portland Stone and concrete that was reinforced by steel bars, the building is 125 feet high, 300 feet wide and has a length of between 170 and 200 feet (narrowing inland). Much larger than the Palazzo Farnese, it contains several features in the stonework reflecting events of the time. Most other large construction projects had been put on hold due to the Great War that had broken out in August 1914, but such was the needs of the shipping industry that this was one which couldn’t be held up. When completed the war was not forgotten, with the shields in between the top windows bearing the arms of the Allies – Great Britain & Ireland, France, Italy, Japan, Montenegro, Russia and Serbia. The shields on the corner were supported by an eagle, due to the company’s shipping links with America.On the third floor, looking out to sea are the arms of British ports, while down the sides there are also signs of the zodiac. Near the base there are nautical emblems as well as carved faces from foreign lands – an Indian American, an Aborigine and an Afro Caribbean. 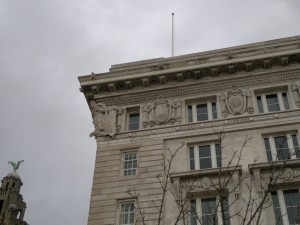 If the exterior isn’t grand enough, then it could be argued that the interior is even more impressive.  Light and airy. the floor space covers 20 acres or 100,000 square yards, and could accommodate 400,000 people standing together. The ground floor contained the general manager’s, publicity, cash and freight offices, as well as the saloon passengers department and public enquiry office, which ran the whole length of the Brunswick Street side of the builfing. The Post said it had the ‘finest range of architectural interior’ in Liverpool, consisting of Greek Pentelikon marble columns topped with mahogany, glazed canopies and marble and linoleum floors – marble for the staff, and linoleum so the public could tread noiselessly so as not to disturb those hard at work. The lower ground floor, which was still very light and airy, contained all the refreshment, baggage and customs facilities for second and third class passengers. The fifth floor, accessed by three express lifts, was home to the chairman’s office and boardroom, conference suites, architects offices and a staff restaurant. The second, third and fourth floors were rented out to other companies, including another shipping firm – the Anchor Brocklebank. A war memorial, which itself is Grade II listed, was unveiled by the Earl of Derby in 1921. It consists of a man at the top  a Doric column, stood at the prow of a Roman ship. The inscription reads ‘pro patria’, Latin for ‘for country.’

The Great Depression of the 1920s saw Cunard encounter financial difficulties, while their great rival White Star Line was in even more trouble, having lost a massive amount of capital in an investment crash. The government offered Cunard loans to build two new ships, but only on the proviso they merged with White Star. This led to the formation of Cunard White Star, with the Cunard Building remaining as the headquarters, being far more grander than Albion House, situated nearby on the corner of James Street and The Strand. The company remained as Cunard-White Star until 1947, when Cunard bought her partner out and reverted to plain Cunard. During World War 2 the basement of the was used as an air raid shelter for employees of this and neighbouring buildings. Reinforced with steel in case of a direct hit, it also served as a command centre for all air raid wardens in the central area. The Post predicted that the Cunard Building would do the company 100 years, but as it was Cunard moved out in the late 1960s when they ceased Trans-Atlantic passenger services from Liverpool and concentrated on the cruise market from Southampton instead. Nearly 50 years later though the ground floor is to be used to process passengers again as it becomes the processing point for passengers using Liverpool’s cruise terminal, while Liverpool city council staff will also occupy the building from 2014. 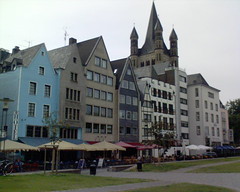