Former Everton player Jack Sharp, who opened a sports shop after he finished playing, is the only sportsman to appear for one of Merseyside’s big two clubs and represent England at both football and cricket.

rn in Hereford in 1878 . The youngest of four brothers, he was the son of a butcher. He began his professional football career with Aston Villa, scoring fifteen goals in twenty-three appearances for the West Midland’s side. He was initially a centre forward but due to his short stature, being just five feet seven inches, he was moved out onto the right wing.

In 1899 Sharp transferred to Everton, but his lodgings at 86 Rockfield Road were nearer to Liverpool’s Anfield ground than his own club’s. In eleven seasons with the Blues he played 300 league games and scored 68 goals. He was an FA Cup winner in 1906, beating Newcastle in the final and the following year scored his side’s goal as they lost the final 2-1 to Sheffield Wednesday. He was twice capped by England, scoring once in a 4-0 win over Ireland at Wolverhampton in 1903.

As well as enjoying a successful football career, Sharp was also a talented cricketer. He played for Lancashire during the summer months and even described himself as a cricketer in the census of 1901.  In 1904 they won the county championship without losing a game and Sharp played in every match. A competent batsman and fast bowler, he was selected for a test series against Australia in 1909, hitting a century at The Oval.

In 1910 Sharp, who was by now captain of Everton, announced his retirement from playing football, saying he wanted to quit when he was at the peak of his game and not be forced out. He became a director at 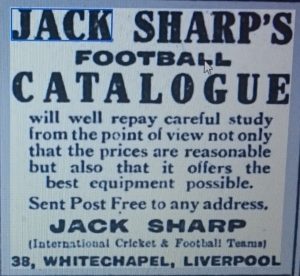 Everton and also expanded the sports outfitter business he had set up two years earlier at number 38 Whitechapel in Liverpool under the management of Mr J.J. Rice. For many years, his business supplied the team kits for Liverpool, Everton and other sides in the North West. In 1914 Liverpool reached the FA Cup final and as well as supplying the Reds strip, he also did so to the opposition Burnley.

Sharp continued to play cricket for Lancashire and retired as a professional in 1918. However he remained on their books as an amateur, captaining the club between 1923 and 1925. His easy going manner and respect for those who had opinions that didn’t match his own meant he had many friends in both the sports and business world. 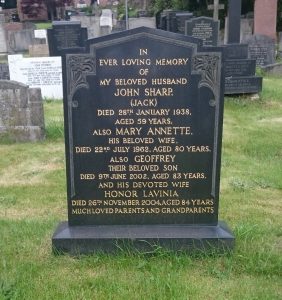 Jack Sharp died on of heart failure on 28th January 1938 at his home in Wavertree, leaving a widow, two sons and a daughter. His death came as a great shock as he was extremely fit and looked far younger than his 59 years. His funeral took place three days later at All Saints Church in Childwall, with many football clubs sending wreaths in their colours.

His name live on though as his shop, which remained in the family, was arguably the best sports store in Liverpool city centre for a number of decades. It was eventually bought in the 1980s by JJB and the site later become the 08 place as part of Liverpool’s Capital of Culture year. It is now occupied by Trailfinders travel agents. Despite Sharp having left Everton more than a century ago, he remains part of their folklore and is one of ten millennium giants on their website.

ENGLAND CRICKETER WHO DIED IN WORKHOUSE