Opposite St George’s Hall is the North Western Hall student accommodation, which opened in 1996, was once one of the grandest hotels in Liverpool. 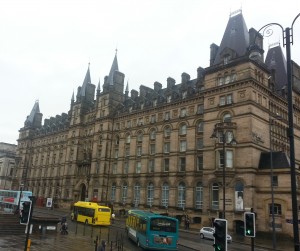 Designed in a Renaissance style by eminent Aigburth born architect Alfred Waterhouse, building of the North Western hotel commenced in 1868. It was part of an overall development of Lime Street station by the London & North Western Railway Company that saw four platforms added and also a new roof structure.

There were concerns that Waterhouse would design something so grand it would outshine St George’s Hall, but that didn’t turn out to be the case. A prominent feature though was two towers in the middle that were very similar to Tower Bridge. Inside the hotel was airy, light and spacious with a large grand staircase taking guests to the upper floors. In addition to the 200 bedrooms there were billiards, smoking and reading rooms which were elegantly but not extravagantly furnished by local companies.

The first managers of the hotel when building was complete in February 1871 were Mr & Mrs Bisserot, formerly of the Angel Hotel in Dale Street. The opening was a private affair, with a banquet for invited guests before the public were allowed in on the 1st March. Being next to Lime Street station, the hotel received many guests staying overnight before taking trains, having often just disembarked from a Trans-Atlantic liner. One of the first notable guests was Robert Cumming Schenck, who was appointed United States Minister to England in June that year and stayed after disembarking from the Cunard liner Cuba, on which he had sailed from New York.

Two years after its opening, there was a tragedy at the hotel when a London businessman, 40 year old Charles Woodcock, committed suicide by jumping fifty feet from his fourth floor bedroom window on 30th April 1873. The following month though there was a happier event at the hotel when it received its first royal guest, King Leopold II of Belgium, who stayed there for one night on a brief visit to Liverpool that included a tour of the Sailor’s Home and trip across the Mersey to Cammell Laird shipbuilders. In June 1873 the Shah of Persia was at the hotel although not as an overnight guest. Instead he just took refreshments there after a day visit to Liverpool, prior to boarding a train to Trentham where he was staying with the Duke of Sutherland. 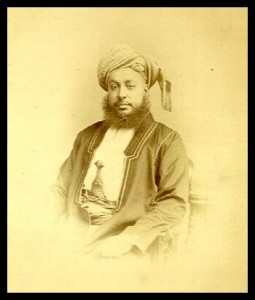 The rest of the decade saw plenty of other distinguished guests. In July 1875 Bargash bin Said, the Sultan of Zanzibar and his entourage took up a suite of apartments on a three day visit to Liverpool, during which he attended a luncheon in his honour at the Town Hall and took some trips on the River Mersey. The hotel found itself the target of criminals on a number of occasions. The same month that the Sultan of Zanzibar visited staff noticed that a Mr Elliot from Whitchurch, who was a regular guest, always left with luggage having arrived with none and he was soon arrested and committed for trial on theft charges. A strange theft occurred in June 1875 when  a plumber doing work there stole a chicken from the kitchens and was sentenced to one months hard labour.

Being opposite St George’s Hall where assize trials took place, the hotel was a popular place to stay for many of the lawyers involved and also journalists from the national newspapers. In 1931 Roland Oliver, defence barrister stayed there for the duration of the trial of William Wallace who was accused of murdering his wife in Anfield. In a case that made legal history, Wallace was found guilty only for the High Court to overturn the verdict on the grounds that the jury reached their conclusion despite the evidence suggested an acquittal was needed.

Just two years later though the hotel closed and remained empty for sixty years before it was finally opened again in 1996, after being converted into student flats with accommodation for 250.