Two hundred and four years ago the power of the River Mersey was demonstrated when an inspiring young churchman, who had only been in the town for six months, tragically drowned whilst bathing.

Born in 1791 in Hertfordshire, Thomas Spencer was working as glover’s apprentice in London when he became interested in the dissenting ministries in 1805. After studying Hebrew he was admitted to the Hoxton Dissenter’s Training College for Ministers, going on to preach in London, Brighton and Surrey. In the summer of 1810 he was ordered to take up a position at the Newington Chapel in Renshaw Street, Liverpool after the Reverend David Bruce died. Spencer was against this appointment as he felt he was too young to come to what he had been led to believe by others was an immoral town. However he was warmly received and his lively affectionate manner, simple discourses and persuasive eloquence led to numbers increasing every week. 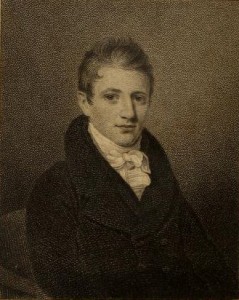 Spencer returned to Hoxton in August after two months in Liverpool, but he was soon invited to become the pastor on a permanent basis and returned in February 1811. such was the demand to hear him that all classes of citizens were regularly turned away from the chapel, where he could give two or three sermons each Sabbath. Such was his enthusiasm that some would last an hour and a half but he was persuaded by doctors to reduce these to just under an hour. Within two months it had been decided that a new building was needed and on 15th April he laid the foundation stone of a new chapel that could accommodate 2,000 worshippers. In June he was ordained as a minister at the Byrom Street Chapel.

His last week on Earth saw him lay the foundation stone of a chapel in Prescot and also preach in St Helens. He preached as usual at Newington on the Sunday, where a collection was made for the ongoing development of the new chapel. He admitted that it was on the ‘will of god’ that had led him to settle in Liverpool but he was now so happy that things had turned out that way. His evening sermon was packed and afterwards he went to a friend’s house for supper, where he remarked that he had no fatigue whatsoever despite a punishing schedule. At around 11pm he returned to Park Road, where he lodged with Mr Lascells.

The following morning, Monday 5th August, Spencer slept in then spoke with a female who had just joined the church and wanted reassurance that she had no fear of being unable to fulfil the promises made to God.  He then stated that he intended to bathe as it would help get his mind ready to prepare a sermon he would be delivering in the week for the Religious Tract society. The family he was staying with advised him to go as soon as he could as high tide would be here soon and he went out with the female.She headed home and he went off in the opposite direction towards the path across the fields that led to the Herculaneum Potteries and the South Shore.

When he reached the spot where he desired to bathe, shortly before twelve o’clock, there were two others there. One man was on his way out and said that the shore was stony, but it was better when further in. After stripping off and stepping into the water Spencer commented on how cold it was but the other man called Mr Potter said it would be fine when he was immersed in it.  Spencer was comfortably swimming at waist height when he was swept off by a current and around a rock.  The current then began to drive Potter around the rock but he was a strong swimmer and managed to get  back to the shore.

Potter anxiously looked for Spencer and it wasn’t until about two minutes later that he saw his head bobbing above the water. He immediately swam out towards the rock but the current was too strong and he couldn’t reach Spencer before he fell  below the water, which had a depth of about seven feet. Potter then ran to the Herculaneum Potteries for help. Two boats were dispatched but there was no sign of Spencer and it was forty five minutes before his body was found. When Spencer was pulled ashore, his face had a serene look and there were no bruises or signs of a struggle and he was quickly taken to a nearby house where three medical men were on standby. they tried as hard as they could but after nearly four hours they finally conceded that life was extinguished.

News quickly spread around the town and there was shock and regret that a man whose congregation of hundreds had hung on to every word the day before had been taken so suddenly. Many went to the place where he had last been seen alive for reflection and all around there was confusion and distress. He was described in local presses as having ‘pulpit talents so far above his years’ and that he ‘had a power of attaching the audience in a manner that will never be forgotten by those that attended his ministry.’

The funeral took place on 13th August, his body being taken from Toxteth Park to the Newington Chapel followed by 140 official mourners and many more lining the streets to pay respects. Readings from Corinthians and Thessalonians were made before the coffin was taken to the burial spot and interred following a prayer by Reverend Lister from the Lime Street Chapel. The following Sunday there was a disconsolate gathering at the Newington Chapel where Reverend William Roby of Manchester read a funeral sermon from Hebrews. It was not just in Liverpool where his death was felt, with many sermons being preached in his memory in London.

The Newington Chapel continued to host its congregation for over fifty more years before the building was sold to the German Evangelical Church. The building was demolished in the 1930s after being sold to the Cheshire Lines railway company. The Herculaneum Pottery closed in 1841 and in 1866 the Herculaneum Dock opened; this was eventually filled in and now occupied by the City Quay apartments, off Ellerman Road.