William Wethered was born in Bristol in 1864, the son of a colliery proprietor. He moved to North West England in 1881 and took an interest in saltworks near Fleetwood, which was taken over by United Alkali Co in 1890. He became a director of this if this company which would later go on to merge with three other chemical companies in 1926 to form ICI.

In 1901 Wethered published the Compound Division Ready Reckoner, which simplified the calculations of cost sheets for businesses. This work is still available today and can be purchased from Amazon for £19.99. That year in the census he described himself as a salt merchant. 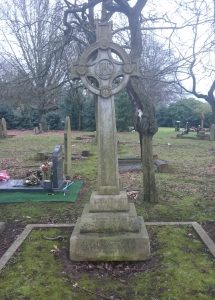 As a member of the 6th Lancashire Artillery Volunteers, Wethered often visited wounded Unionist soldiers in hospital during Word War One, even taking them from the trains to hospitals in his own cars. He also recruited for the war effort locally for Lord Derby.

William Wethered died of on 17th October 1917. After having a seizure at the Conservative Club in Dale St, now the Doubletree by Hilton Hotel, he was taken to his home at Redcourt, Carnatic Road, Mossley Hill. However he died there of heart failure and although his health had been failing of late his death came as a shock.

Wethered’s funeral service took place four days later at St Agnes Church on Ullet Road and was attended by the Lord Mayor and members of the local Conservative associations and volunteer groups. He was then interred in Allerton cemetery.

A History of ICI is available on Amazon